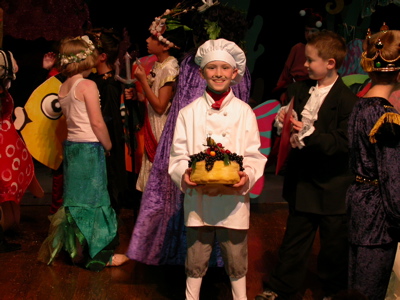 On December 3rd and 4th Garrett made his acting debut in a Shamrock Players and Armadillo Productions presentation of the “Little Mermaid” at the Franke Center for the Arts in Marshall, MI.
This was not like the Disney version, it was a different intrepretation of the Hans Christian Anderson story.
In this story the little mermaid becomes human and leaves the ocean forever to marry the boy of her dreams.
Garrett played the part of Chef Pierre as is apparent in the picture above.
It was remarkable how well these 6 to 11 year olds learned their rather lengthly parts and were able to execute their roles.
The play lasted 1.5 hours.